Only $499 and available in bulk from Subrosasoft, The MacLockPick is a handy little device for computer-illiterate trusted civil servants to plug into sleeping MacBooks and collect data from all those computers left lying around at crime scenes – just like on TV. Via Digital Trends Magazine:

Uncle Sam has a new way to pry into your data, and it’s as simple as popping in a thumb drive.

Lock up your MacBooks, Apple fans: SubRosaSoft announced Friday that they are shipping a USB thumb drive, dubbed MacLockPick, that can extract passwords, Internet history, and system settings from an OS X user just by slipping it into a USB drive.

Of course, the drive is only available to law enforcement, but we have to wonder if the same technology that powers it will ever become available to less scrupulous individuals. […]

Anyone wonder just what security measures are in place to ensure that only law enforcement can purchase this. Better yet, what security is in place to ensure that law enforcement doesn’t lose, misplace, or steal the device? Not that it does anything that a power user couldn’t do given a little private time with the computer, but it does make it seamless, simple, silent, and quick – just the thing for the sort of abuse-prone neanderthals that seem to make up far too much of the law enforcement population.

The following is a list of file items that can be extracted using SubRosaSoft’s MacLockPick:

No doubt there will be, if there isn’t already, an open source version of this  or a free set of instructions to DIY for anyone with the time and inclination to do so.

If you’re interested in the subject of data breeches, data loss, and mishandling of private information you might want to have a look at etiolated.org. 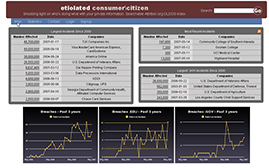 In The secret service for the rest of us, Matt Mower writes:

Blogs and other read/write web tools give us all the ability to gather data and, in our own fashion, analyze it and pass it on. We are each miniature intelligence services for a varied clientelle and, although we too are biased, our bias can be adjusted for since it is more easily determined (over time).

More than a decade ago two futurists – James Dale Davidson and William Rees-Mogg – wrote of the coming breakdown of state-based security and the growth of independent, individual security forces in their books “The Great Reckoning” and “The Sovereign Individual.” They were ridiculed pretty widely at the time and the books were considered fodder for bunker-dwellers, albeit rich bunker-dwellers. Much of what they projected was based on cultural and social models already visible at the time in Latin countries dominated by drug cartels. 15 years and the meteoric rise of technology have changed the landscape of what can be done but, if anything, the predictions of Davidson and Rees-Mogg seem more tangible than ever. If they were guilty of anything, it was merely being too far ahead of their time.

Current futurists and military analysts like John Robb (my source for the original story) are busily deconstructing the projected fall of the nation-state, peak oil,  the rise of non-state entities, etc all of which is important. But no one seems to be thinking about my problems in the way that Davidson and Rees-Mogg did – deciphering what all this chaos means to the individual – and more importantly what to do about it.

How do we predict the unpredictable? How do we assess probability and impact? How do we, as individuals, make the right choices for where to live, where to put our money, how to prepare for the unexpected, how to protect our family, our friends, ourselves? Packing the basement full of survival rations, bottled water, duct tape and gas masks is a shallow, and rather ineffectual, approach.

John Robb, independent military analyst, futurist, and author of â€œBrave New War,â€ on Friday posted this interesting tidbit on Friday regarding the move by GlobalCos into the intelligence and security space:

A strong sign that the nation-state is in decay is the frequency we see announcements of companies that are replicating some of the most sensitive government services. The most recent mover is Walmart, which is in the process of putting together its own intelligence arm (it’s being built by a former CIA/FBI officer Kenneth Senser). For those unable to afford their own global intelligence unit, Blackwater’s Cofer Black is building one called Total Intelligence Solutions.

If you want to get up to speed quickly, the background for this is available in BNW.

This makes sense, of course. As these companies plan long-term deployments across the globe they can little afford not to know the risks involved. And the intelligence fiasco of Iraq WMDs showed how unreliable government intelligence can be. This looks, to me, like another area where oligopoly control of a market makes sense. I wonder how the potential for shared intelligence organizations, and perhaps shared risk, will alter the oligopoly landscape?