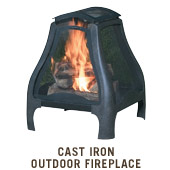 Last Christmas (aka National Retailers Holiday) I received this lovely Charbroil Cast Iron Fireplace as a gift. I’ve never used it because, well, because I had to build a patio for it first – you can’t set something like that just anywhere. I had to make a suitably safe spot for it. But this year I did that and as the weather is cooling off I decided to set it up Monday night.

I don’t have a wood-burning fireplace in my house, nor any need for firewood, so last night I stopped at the local grocery and picked up a couple of bundles of firewood to test it out – supposedly only the finest hardwoods, seasoned for even burning. Two bundles for $8. Such a deal. How hard could it be, right?

I mean, I’ve watched Bear Grylls start a fire in the middle of freakin’ nowhere, using nothing more than two stones and a tiny handful of dead grass. But not me, no sir. I bought asbestos firewood. I bought the only two bundles of flame-proof hardwood on the planet. I used newspapers, dried twigs and straw, chipped off small bits for kindling. It all burned and then died.

I got a pint of lighter fluid ($3.49 and another trip to the corner market) and soaked everything good and tried again. The fluid flamed up, burned off and died. I used the entire pint of fluid to keep everything burning. I fanned the flames, I readjusted the logs, I turned them and blew on them and squirted more lighter fluid. It was like some scene from “Jackass, The Movie” with me about to be blown up. But nothing.

I finally went to the shop and got a blow torch. I used an entire can of MAPP gas. You can weld metal with this stuff, but it wouldn’t set those goddamn logs on fire. By this time I’d spent more than an hour and a half trying to light this fire. I had a firepit full of ash, carbonized twigs, newspaper, and soot – and four sooty, impervious, defiant logs staring at me.

I finally broke down and went, again, to the store. I bought a case of those ready-made, artificial, fireplace logs – the kind made from sawdust and some sort of slow-burning organic glue that holds it all together. All you do is set the wrapper on fire on walk away and it burns merrily for 3-4 hours.

I put two of them in the firepit and arranged the satanic logs over, under and around them. Then I set the wrappers on fire. In short order I had a blazing little bonfire in my fireplace. It was 11:30pm. I now had to stay up another four hours, until it burned itself out, before I could safely go to bed. I wasn’t about to douse this damn fire.

Yet another growing list of evidence that there is little actual difference in what we westerners call “moderate” islam and “radical” islam – there are merely varying degrees of apathy that determine the level of action.

An interview with Ayaan Hirsi Ali in the November issue of Reason magazine. My favorite quote is her closing statement:

But I don’t even think that the trouble is Islam. The trouble is the West, because in the West there’s this notion that we are invincible and that everyone will modernize anyway, and that what we are seeing now in Muslim countries is a craving for respect. Or it’s poverty, or it’s caused by colonization.

The Western mind-set — that if we respect them, they’re going to respect us, that if we indulge and appease and condone and so on, the problem will go away — is delusional. The problem is not going to go away. Confront it, or it’s only going to get bigger.

I can’t point you to my results yet, but I can say that it’s helped me immensely and allowed me to actually structure a multi-column web page without the use of tables.

About once a year I foolishly take on the task of designing a new website. As you can see from the HTML on this very page (assuming you’re looking at my web page and not the RSS feed) this effort has never actually resulted in a new design for b.cognosco. But never mind that.

What normally happens is that I spend days and days with high blood pressure, evolving a blue-streak vocabulary, throwing temper tantrums, and being cruel to small animals while I try to get HTML to do what I want with my limited understanding of the all too cryptic CSS.

Once I have good and well failed at that I try to hire someone to help me. I am a cheap bastard and have no interest in going out to *real* designers who will charge me $3,000 – $10,000 for a website that is basically for some hobby interest of mine or some freebie for a friend. But I am also a contrarian – so I do not wish to click over to TypePad or WordPress and grab up a template that is in use by a few hundred other people. I like to do a lot of stuff that simple templates don’t cover.

So I do various mockups of the page in something I can understand (like Adobe InDesign) until I have something I am happy with, create a PDF, and send it to some HTML slice-and-dice service or con one of the many web people I know into doing a little work for me on the side.

Sometimes this last approach works out ok except that no one creates CSS stylesheets I can really understand. So even if the site looks good I have to spend days of frustration trying to understand the nesting and tagging and inheritance and hacks and browser-specific workarounds that everyone uses.

But Blueprint has made it a lot easier, and more understandable, to use CSS by providing a discrete grid for layout and a well-documented set of stylesheets that explain what things do. I’m told the grid is even quite useful for experienced web designers to speed their basic development. I’ll put some links to the new site(s) here when they’re ready. In the meantime, try out Blueprint. It’s nice.

This is old news by now and my source is not impeccable, but I asked the question a few days ago, “Who sold the rights for commercial use of Led Zeppelin’s music to Cadillac?”

Guess all that money from the ’70s ran out. But it says something interesting that they still control their music, unlike the Beatles and lots of other musicians. Good for them.