For the past couple of weeks I’ve been working on a new site design for a client – InterviewRX.com. We actually have the structure and information architecture pretty well mapped out and are focusing on look and feel, but this type of tool could still come in handy. Even though I am not a designer I’ve taken to creating my own mockups over the years because I find starting from ground zero with a designer to be incredibly frustrating and expensive – it just takes forever for a designer, even a good one, to figure out what you want if you can’t draw at least a basic picture of it yourself. So now I create a fairly complete mockup and then have a designer polish it. That works out much better for me.

But even though I’m getting better at it, I still go through lots of iterations – especially in basic information architecture. Something like Denim could come in handy. I like the mindmap-style sketch interface – seems to me the two are quite similar. I’ll be trying it out later this week. Hat tip to Jim McGee:

When you are making websites, inevitably some form of sketching will be done to rough out it’s design and interactivity.

Whether you’re the web designer or someone trying to communicate your ideas to a web designer, this little piece of software, called Denim, will come in handy.

What Denim does is allow you to create a mock website, with linking pages, just from your rough sketches. Obviously, this will work particularly well with a tablet interface. 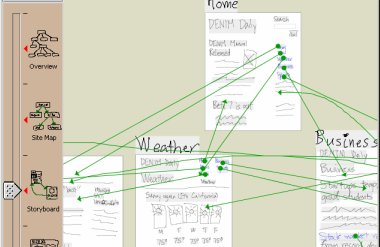 Denim by the University Of Washington